Home → The Women’s Health Blog → The HPV Vaccine Works – But Only If You Get It. So What Are You Waiting For? 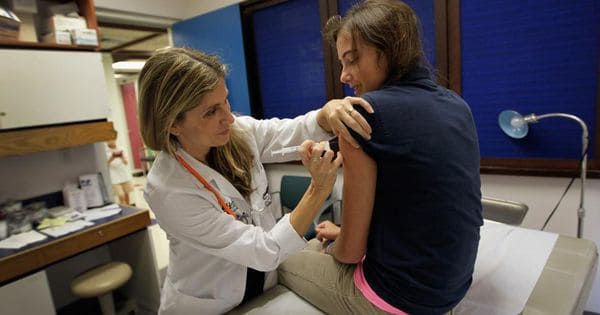 Gardasil protects against human papillomavirus, a common sexually-transmitted infection that may affect as many as 9 in 10 people throughout their lifespan. The vaccine in its newest iteration, Gardasil 9, targets the most deadly strains of the virus, which cause an estimated 90% of cervical cancers and 90% of cases of genital warts.

A recent international systematic review of vaccine programs shows reductions between 72%-92% in the occurrence of HPV-related diseases. The review evaluated 58 separate effectiveness studies of vaccine programs in North America, Europe, Australia, and New Zealand. The results were published in Business Wire in June of 2016 by manufacturing company Merck.

“These data reinforce that Gardasil is important in the fight against cervical cancer and certain other HPV-related cancers and diseases,” said Jacques Cholat, M.D. and president of Merck Vaccines.

“However,” he continued, “the full public health potential of HPV vaccination of males and females is not yet realized even after a decade of use.”

Despite the fact that as many as 93% of cervical cancers are completely preventable, we still see over 12,000 new diagnoses each year in the U.S. Globally, that number tops half a million, according to the American Cancer Society.

And these cancers are among the deadliest known to medical science. Each year, roughly 4,000 women in the U.S., and over 300,000 women worldwide, perish from cervical cancer, according to the National Institutes of Health.

Preventing cervical cancer – not as easy as it sounds

Physicians have long known that the existence of the vaccine is not enough to prevent cervical cancer on a large scale. To get to 93% prevention, women must:

Unfortunately, loads of evidence suggests that these two things just aren’t being done.

The CDC recommends that all children ages 11-12 should get the vaccine – both boys and girls. Gardasil is administered in two doses, 6-12 months apart.

But a study published in Lancet Global Health found that only one-third of women in their 20s had received both doses, and that was in higher-income regions. In lower-income regions, only a paltry 2-7% of women had gotten their full course.

Because doctors recommend vaccination at such a young age, teens must rely on their parents to make this crucial decision for them. And with the sensitive nature of the disease’s mode of transmission, many parents have been resistant to the idea. According to the CDC, about 60% of parents have elected to vaccinate their children. This number varies state by state, and drops to less than 50% in at least 7 states.

The myths about the HPV vaccination need to be dispelled

Proponents of the vaccine continue to fight myths about its efficacy and implications. Some parental advocacy groups believe that Gardasil encourages kids to have sex, while others are concerned about fertility problems and contamination by toxins. The wave of recent anti-vaxx backlash hasn’t made it easy.

“We have to really understand how best to reach girls in all different types of communities for health services, including the HPV vaccine,” says Kate O’Brien, MD, MPH, and executive director of the International Vaccine Access Center. “We also have to assure that families, girls, community leaders, and country decision-makers have the facts about the safety and value of the vaccine.”

In addition, many women are neglecting to get their regular Pap smears. Regular Pap tests are essential to detecting pre-cancerous lesions and other signs of cervical cancer. Cervical pre-cancer typically manifests with no symptoms, making it difficult to catch on your own. Yet, catching the signs early is paramount to effective treatment.

The U.S. Preventative Services Taskforce recommends a Pap every three years for women between the ages of 21 and 65. But according to the National Center for Health Statistics, only 69% of adult women have had a Pap within the past three years.

A recent survey of over 2,000 women taken by Jo’s Cervical Cancer Trust found that there are a variety of reasons women cite for avoiding their regular Pap, including embarrassment about their bodies (35%), denial that something could be wrong (20%), misunderstanding of risk (24%), and the belief that getting the HPV vaccine renders Pap smears unnecessary (11%). Access to healthcare and lack of knowledge were significant barriers as well, with 26% saying they were unable to get an appointment, and 30% saying they didn’t know where to go to get a Pap smear.

Vaccination against HPV and regular Pap smears are the best route to preventing cervical cancer. I recommend patients get the HPV vaccine between the ages of 11-26, regardless of gender. If you have questions or concerns about Gardasil or Pap smears, give us a call at (844) 863-6700 or schedule an appointment. Thaïs

Read the full article at: www.forbes.com

< PREVIOUS  Livestrong's Article "12 Things That Should Never Go Near Your Cooch" Featuring Dr. Aliabadi  |   ARTICLE   |   NEXT >When Your Child Says “Alexa” Before “Mama”, Is It Time to Worry About Your Parenting Skills as Well as Your Child?