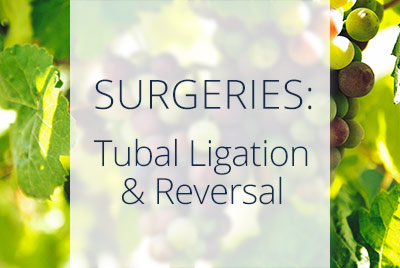 Tubal ligation, also known as having your “tubes tied,” is a female sterilization procedure. In this procedure, the fallopian tubes are surgically closed so that it is no longer possible for sperm to fertilize the eggs. After ligation, it is no longer possible to conceive naturally. Many women who are finished having children choose to have a tubal ligation so that they no longer have to worry about taking birth control.

Tubal ligation does not impact your menstrual cycle, so you will continue to have your period.

The decision to have your tubes tied should not be made lightly. Tubal ligation is considered a permanent form of birth control, but it is possible to reverse a tubal ligation should you wish to become pregnant in the future.

Your doctor can close your fallopian tubes through:

A tubal ligation can be performed at any stage of a woman’s life. They are often performed after childbirth if the woman is sure she is done having children. They can also be performed at the same time as another pelvic surgery, including a C-section.

Some women may regret having their tubes tied. Women under the age of 30, or women who had their tubes tied under pressure or marital distress, are more likely to consider having a tubal ligation reversal.

If you change your mind about having children following tubal ligation, your doctor may be able to reverse the surgery. Your doctor will consider a few factors before determining your fitness for reversal surgery, such as:

Your doctor will take a full medical history and perform some tests to evaluate your candidacy for a tubal ligation reversal.

How is Tubal Reversal Surgeries Performed?

Reversal surgery may be performed in a hospital, but it can often be performed in your doctor’s office as an outpatient procedure. It should take no longer than three hours.

Your doctor will administer general anesthesia, so you won’t be awake during the procedure. Your surgery will then be performed laparoscopically, which is a minimally-invasive procedure that involves making only one or two small incisions in your lower abdomen, rather than one large incision. The surgeon inserts a tiny lighted camera that projects a view of the surgical site onto a screen.  Guided by the laparoscope, your surgeon will remove the clips or bands blocking your tubes, or stitch the cut ends back together.

Tubal reversal often takes a higher toll on the body than the original tubal ligation and may take a bit longer to fully recover. If your procedure was performed in a hospital, you may need to stay overnight for a day or two. If your surgery was performed on an outpatient basis, you should be able to return home after 2-4 hours. You will need a friend or relative to take you home and take care of you following the procedure. Most women are able to return to their normal routines after 10-14 days.

It’s common to experience pain while recovering from surgery. Your doctor can prescribe you medication to manage this. Complications are rare, but they may include:

Call your doctor right away if you experience any symptoms, such as severe pain, nausea, fever, or vomiting.

Generally, women have about a 40%-85% chance of becoming pregnant after a tubal reversal. Your chances of conceiving naturally depend upon multiple factors, which your doctor can discuss with you before and after you have the surgery.

Younger women tend to have an easier time becoming pregnant after tubal reversal. Pregnancy is most likely to occur within the first year after surgery. Your ability to become pregnant will also depend on the type of ligation and reversal that was performed and the amount of scar tissue that may be left in your fallopian tubes following the surgery. Scar tissue, also known as adhesions, can cause your pelvic organs to stick together, creating further blockages in your tubes.

Women who have had tubal ligation and reversal are at an increased risk of an ectopic pregnancy. This is a non-viable pregnancy and considered a life-threatening emergency. An ectopic pregnancy occurs when a fertilized egg implants in the fallopian tube and the cells begin to divide and grow. This growth could rupture the tube, causing internal bleeding and possible death. An ectopic pregnancy must be immediately treated with surgery.

Although many women can successfully carry a pregnancy to term following a tubal reversal, having the procedure is not without risk. It’s important to understand all of the risks and possible complications prior to making your decision.

After consulting with your doctor or fertility specialist, you may wish to try an alternative route to pregnancy, such as in-vitro fertilization. IVF allows your eggs to completely bypass your fallopian tubes by extracting the eggs, fertilizing them in a lab, then implanting the embryos directly into your womb.

If you are considering Tubal Ligation or have had the procedure and now want Tubal Ligation Reversal, please talk to your doctor to get a clear understand of your options.