Endometrial ablation is an outpatient procedure that can treat heavy menstrual bleeding. In this procedure, your OB-GYN uses a medical device called the Hydro ThermAblator (HTA) to circulate heated saline through your uterus to treat and destroy the endometrium. Following endometrial ablation, most women report substantially lighter periods, and many women no longer menstruate at all.

What conditions does endometrial ablation treat?

Endometrial ablation is usually performed as a treatment for menorrhagia, the clinical term for excessive menstrual bleeding. Women with menorrhagia experience heavy, clotting, or abnormally long menstrual periods. Menorrhagia typically presents as a symptom of another gynecological problem, such as:

Your gynecologist will be able to diagnose the cause of your menorrhagia. It’s important to note that endometrial ablation treats the symptom – it does not necessarily treat the underlying condition. Speak with your OB-GYN get a better understanding of your illness and the best course of treatment for you. 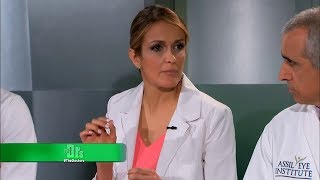 As part of the CBS TV show “The Doctors,” in a segment entitled “The IV League,” The IV league brings together top medical experts and surgeons in their respective fields. In this episode Dr. Aliabadi treats a woman with severe uterine bleeding sometimes last months at a time. Joan has lost so much blood that she is severely anemic and required a blood transfusion. She has become so weak that she suffered a fall, tore a tendon and dislocated her kneecap, and now needs surgery. Before she can have surgery, Dr. Aliabadi must get her bleeding under control. Dr. Aliabadi performs and endometrial ablation and the results are amazing. 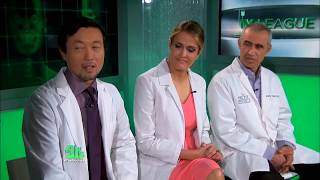 As part of the CBS TV show “The Doctors,” in a segment entitled “The IV League,” The IV league brings together top medical experts and surgeons in their respective fields. In this episode Dr. Aliabadi treats a woman with severe uterine bleeding sometimes last months at a time.

What is considered “excessive bleeding”?

Menorrhagia is a clinical condition that only your doctor can diagnose. Some experts estimate that menorrhagia affects up to 20% of women. Consider making an appointment for an evaluation if your periods are interfering with your everyday activities, or if you:

Can I get pregnant following endometrial ablation?

Endometrial ablation significantly reduces a woman’s ability to become pregnant. While it is not impossible to get pregnant following ablation, it is generally recommended that ablation only be performed for premenopausal women who are finished having children.

How does endometrial ablation HTA work?

During the procedure, your cervix will be slightly dilated, and two instruments will be inserted into your cervix: a hysteroscope and an HTA sheath. The hysteroscope is equipped with a lighted camera and will allow your doctor to view the inside of your uterus.

The sheath will allow room-temperature saline to flow into your uterus, filling the cavity and circulating through the HTA device. The HTA device will then begin to heat the saline to 194˚F. The hot saline heats the endometrium, blanching it and destroying it after about 10 minutes of treatment. Your doctor will then cool the saline to room temperature before draining it from your uterus and removing the sheath and hysteroscope.

What should I expect during my procedure?

Endometrial ablation HTA is typically performed as an outpatient procedure, right in your doctor’s office. At your appointment, you will be asked to undress from the waist down and lie down on the examination table with your feet propped up in stirrups. You and your doctor may decide what type of anesthesia to use:

What are the risks of endometrial ablation HTA?

Like all medical procedures, endometrial ablation carries some risks. Please discuss your concerns with your doctor. Possible risks include:

Following your procedure, you may experience some mild cramping, and possibly some nausea and vomiting. These symptoms should start to clear up after about a day. Most women are able to return to their normal routines the next day.

While your menstrual periods may continue to be heavy for the next few months, this should subside. Most women find that their periods become dramatically lighter and shorter as a result of the procedure, and some women’s periods disappear altogether. In a clinical trial, 98% of women reported that they were satisfied with their periods after receiving the treatment.

If you are suffering from menorrhagia or excessive bleeding, or have any questions about it treatments, please do not ignore this and talk with your doctor