Menopause itself is a powerful argument against the reign of a just and fair deity. During menopause, a woman may suffer through hot flashes, night sweats, vaginal discomfort, sleep disturbance, loss of libido, heart palpitations, joint and muscle aches, bladder problems, and depression.

And now cardiovascular risk is linked to early menopause

A study led by a Harvard cardiologist indicates that early menopause is an indicator of an increased risk of cardiovascular disease. More specifically, women who enter menopause before age 40 are at increased risk for high blood pressure, coronary heart disease, heart failure, blood clots, and heart valve difficulties.

What were the results of the study?

The researchers utilized a database containing the health records of 144,260 postmenopausal British women. The women’s average age was about 60. 3.4% (4904) had begun menopause before age 40. Another 694 had encountered early menopause because their ovaries were surgically removed, in a procedure called an oophorectomy.

These numbers sharply contrast with the women who reached menopause after the age of 40. Only 3.9% of those women encountered cardiovascular disease during the follow-up period.

Another team of scientists, based in Queensland University, aggregated data from fifteen studies covering a total of more than 300,000 women. This included almost 13,000 women who survived cardiac events like a heart attack or stroke after menopause. The study chronologically categorized menopause as:

Those who experienced premature menopause were 55% more likely to have a heart attack or stroke after menopause than were those whose menopause qualified as normal. Early menopause carried a 30% greater risk of cardiovascular disease. With relatively early menopause, the increase in risk was 12%.

In August of last year, we wrote here about the clear link between menopause and Alzheimer’s disease. We noted that research presented at the 2018 Alzheimer’s Association International Conference demonstrates that early menopause is strongly associated with Alzheimer’s.

Those studies show that a reduced span of fertility, shortened by early menopause, increases the odds of incurring Alzheimer’s by 28%.

Early menopause means that a woman’s body is prematurely deprived of hormones that appear to be essential for maximum health.

There’s a chicken/egg quandary here. It’s unclear whether menopause triggers a loss of essential hormones or whether a loss of those hormones triggers menopause.

Whatever the answer may be, it does seem that premature deprivation of hormones is strongly related to both cardiovascular disease and Alzheimer’s.

What’s the history of hormone therapy? 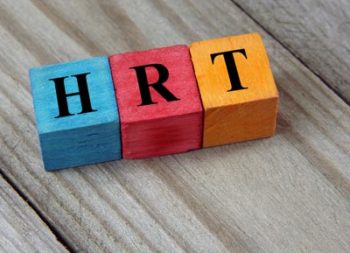 Hormone replacement therapy was indeed the new thing, and then the standard thing, between about 1960 and the early 2000’s. In those decades, millions of women received effective relief from most symptoms of menopause.

In 2002 and 2003, the initial results of two massive studies were released. The Women’s Health Initiative (WHI), in the United States, and the Million Women Study (MWS), in the UK, each raised concern about the safety of hormone replacement therapy (HRT).

Both studies indicated that HRT might increase the risk of breast cancer and cardiovascular disease. The impact of the studies was swift, predictable, and drastic.

Prescriptions and use of HRT plunged by 66%

Over the next couple of decades, millions of women were denied the improved quality of life provided by HRT.

During that same timeframe, observational studies from the ongoing WHI, and re-analysis of the initial reports, have caused the pendulum of professional practice to swing back toward cautious, but widespread, utilization of HRT.

It now appears that women who begin hormone therapy during menopause can safely use it after menopause without incurring a higher risk of cardiovascular events.

Caveat: taking estrogen alone can cause problematic growth of uterine lining, which can be prevented by adding progesterone to the prescription. But it seems it’s the progesterone (not estrogen) that may be linked to cardiovascular problems.

For women without a uterus and/or ovaries, who can safely take estrogen without progesterone, it now seems clear that such therapy helps prevent breast cancer, not cause it.

There is evidence that women on hormone replacement therapy live longer than women who without HRT.

New studies, and re-analysis of older studies, are constantly producing new information on heart health. And it’s of paramount importance to always bear in mind that every woman’s physiology and metabolism are unique to her.

So if you are considering HRT, have a long, thorough, and candid discussion with your gynecologist.

< PREVIOUS  What You Need to Know About Testing for STDs  |   ARTICLE   |   NEXT >What Is CRISPR? Can It Become the Next Antibiotic?