Sometimes there are some stories that are just so unusual they seem to find their way onto the Dr. Phil show.

There was the woman who claimed rapper Eminem was her father. And who could forget the bizarre interaction with Danielle Bregoli, the “cash me outside” girl who’s now known as Bhad Bhabie.

But recently the TV host featured one of his most unusual guests yet: a pair of women who say they have been pregnant for more than a year.

In fact, one of his guests insists she had been pregnant for three years and seven months. 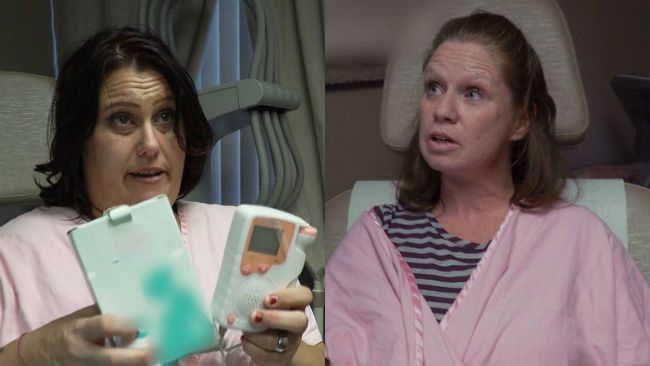 Zona, Dr. Phil’s first guest, insists she had her tubes tied at age 20, yet claims she somehow became pregnant at 40.

“My belly has continued to grow for the three and a half years, but it does grow at super low rates,” she told Dr. Phil.

And Zona says she lives with mood swings, sore breasts, and other classic signs of pregnancy.

Dr. Phil’s other guest, Shayna, says she has been expecting for more than a year. And both women insisted they’re stunned by their medical conditions, and are looking for answers.

Still, they both say the multiple doctors who insist they’re not pregnant are just wrong.

In both cases blood, urine, and even ultrasound tests could not convince the women their doctors were correct.

Shayna even insists she spent “hundreds of dollars” on home pregnancy tests, which all came back negative.

“When you got to nine months, when everybody in the world delivers a baby, and you didn’t, is there a part of you that said, ‘Well they were right?'” Dr. Phil asked her.

“Yeah,” Shayna admitted. “I try to make myself believe I’m not but then there’s movement, and there’s heart rate.”

“The doctors are wrong,” Zona claimed. “I don’t care what medical degree they have. I am 1,000% certain that I am pregnant.”

Called “An Attention Seeker” By Her Own Daughter

Zona, who still smokes, has been labeled “an attention seeker” by her own daughter.

But she claimed to feel “movement” inside her stomach, possibly from as many as six babies, and offered Dr. Phil the chance to feel her stomach.”

Would you agree that this is unusual?” the host asked Zona about her miraculous pregnancy.

“This is very unusual,” she agreed. But she still refused to accept that she might not be pregnant.

And the distraught woman admitted to Dr. Phil her conviction “has torn my family apart.”

“My family does not believe I’m pregnant,” she admitted. “It’s real and it’s misery.”

Both women offered multiple explanations for why so many tests and doctors could fail to identify their conditions.

Zona offered cases of retroverted uterus (sometimes called “titled womb”) to explain why the tests could not find any trace of her supposed babies.

But such a condition could be diagnosed during a routine ultrasound procedure. A tipped uterus will also normally right itself during pregnancy.

Meanwhile, Shayna and Zona both claimed they could be experiencing a “cryptic pregnancy,” meaning a pregnancy that cannot be identified by medical tests.

There is no evidence that such pregnancies exist, and doctors use the term cryptic pregnancy to describe cases where women don’t realize they are pregnant, either for psychological or hormonal reasons.

Despite Dr. Phil’s tough questions, and a pair of physical exams by me, both women left the show still convinced they were pregnant.

< PREVIOUS  This book changed me as a mother. I've seen its impact on my kids  |   ARTICLE   |   NEXT >MIT Uses AI to Predict Breast Cancer Risk 5 Years into the Future