Home → The Women’s Health Blog → Got 60 Seconds? Put Your Baby to Sleep! 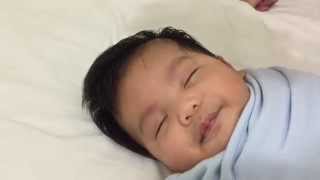 You’re a brand-new mom about to celebrate your very first Mother’s Day. Asked what you would want for your special day, the inestimable gift of sleep may be what you have in mind. Rocking, cradling, bedtime stories, running the car at 2am. How many tricks have you tried to get your newborn to just f

You’re a brand-new mom about to celebrate your very first Mother’s Day. Asked what you would want for your special day, the inestimable gift of sleep may be what you have in mind.

Rocking, cradling, bedtime stories, running the car at 2am. How many tricks have you tried to get your newborn to just fall asleep already?

Here’s a new trick we read saw that just might be the secret to a much-needed good night’s sleep. Australian YouTuber and crafty dad Nathan Dailo puts his infant, Seth, to sleep using only a piece of tissue paper.

The video shows three-month old Seth, swaddled and fussing in bed next to his father, with eyes wide open. His father gently wafts a piece of tissue paper, touching his face from forehead to chin. After about the fifth waft, you can see little Seth’s eyelids start to droop, and after about fourteen, the tiny dude is out like a light. The magic takes about 40 seconds.

Dailo assures us that the tissue paper had NOT been previously soaked with chloroform.

We can’t even imagine how he came up with the idea. As he told TIME, “The tissue trick isn’t actually anything special. Any light touching on the baby’s facial areas such as the head, forehead or the bridge of the nose also works.” If you didn’t have tissue paper lying around, a regular Kleenex would probably work just the same.

The video, published in 2015, has racked up over 11 million views on YouTube. Several commenters have tried it with their own newborns.

Not everyone had so much luck, however. Others reported:

Even if it didn’t work, it was worth the effort for some parents, who at least got an adorable reaction out of their little ones. “I tried this with my daughter out of sheer desperation,” said Jenn. “She thought it was hilarious. It tickled, and she wanted to eat the tissue. She was wide awake after that.”

When Haley’s son was little, she would lightly touch his face with a satin hanky when he was already sleepy. This helped condition him to associate the light touch with sleep and the act would soothe him when he needed that last push to take him to Z-town.

Most parents would be willing to try anything to get away from the more elaborate routines that some babies have trained their moms and dads to perform. Hernan says that the most effective method for his family has been “dinner, a walk, a bath, milk, read a story, say night-night to every object in the house including the ceiling fans, put the baby down, and close the door.” Whew!

The good news is that babies do grow and fussy bedtime is only temporary. At 3 to 4 months, your bundle of joy will usually start sleeping through the night and not a moment too soon!

< PREVIOUS  One Woman and 10 Reasons Why She Loves Being a Boy-Mom  |   ARTICLE   |   NEXT >Why Do More U.S. Women Die in Childbirth Than in All Other Developed Countries?